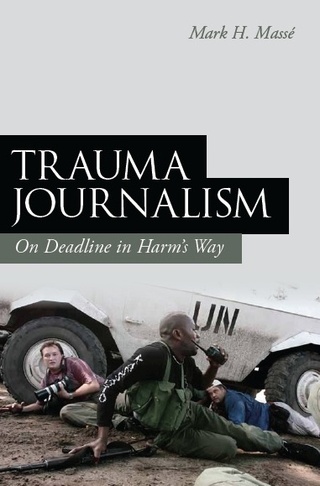 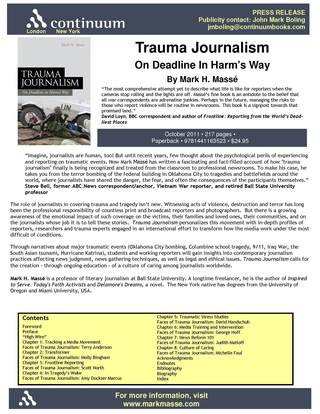 The role of journalists in covering trauma and tragedy isn’t new. Witnessing acts of violence, destruction and terror has long been the professional responsibility of countless print and broadcast reporters and photographers. But there is a growing awareness of the emotional consequences of such coverage on the victims, their families and loved ones, their communities, and on the journalists whose job it is to tell these stories. Trauma Journalism: On Deadline in Harm's Way personalizes this movement with in-depth profiles of reporters, researchers and trauma experts engaged in an international effort to transform how the media work under the most difficult of conditions.

"Imagine, journalists are human, too! But until recent years, few thought about the psychological perils of experiencing and reporting on traumatic events. Now Mark Massé has written a fascinating and fact-filled account of how 'trauma journalism' finally is being recognized and treated from the classroom to professional newsrooms. To make his case, he takes you from the terror bombing of the federal building in Oklahoma City to tragedies and battlefields around the world, where journalists have shared the danger, the fear, and often the consequences of the participants themselves."
Steve Bell, former ABC News correspondent/anchor, Vietnam War reporter, and retired Ball State University professor

"The most comprehensive attempt yet to describe what life is like for reporters when the cameras stop rolling and the lights are off. Massé’s fine book is an antidote to the belief that all war correspondents are adrenaline junkies. Perhaps in the future, managing the risks to those who report violence will be routine in newsrooms. This book is a signpost towards that promised land."
David Loyn, BBC correspondent and author of "Frontline: Reporting from the World’s Deadliest Places"